The first major resort/residential development in the Dominican Republic was on the southeast side—Casa de Campo. No resort has a greater variety of high-quality, world-class sports, activities and dining options in the tropical Western Hemisphere.

It has 1,700 villas, three golf courses, a hotel, a beach, a 400-slip marina plus 70 restaurants, shops and bars including a movie theater and a grocery store.

It has a shooting club with 200 shooting stations on 245 acres of dense, full-growth forest and open fields. This, along with the equestrian center, tennis facility, and the golf courses, has instructors for a range of aptitudes all the way down to all-thumbs inept.

When you decide you want to learn, the staff does not intimidate you. Through a combination of the attributes of patience, understanding and insight, they will tickle your talent out of you—you feel good about learning. But be careful, all these sports are addictive.

Outside of its gates is the city of La Romana, one of the important cigar centers. It also has the largest cruise ship  port in the country. 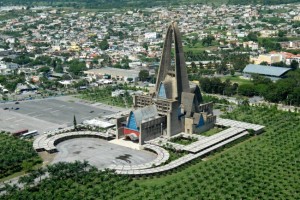 Farther east is Higüey, the capital of the Province of Altagracia, which is also the name of the country’s patron saint. Here is La Basílica de Higüey built in her honor.

The province encompasses the 312 square mile (808 square kilometers) Parque National del Este, which includes 400 caves, some with Taino Indian paintings and the islands of Catalina, Saona, and Catalinita.

The east coast is generally referred to as Punta Cana, though it is really also Bávaro and  Macao. This long strip of land is known for its palm-fringed, sugar-white beaches. That, and its pleasant, low rain-fall climate, has created a powerhouse resort destination of 99 hotels with more than 50,000 rooms. Yet when you walk down the beaches, it just does not seem that crowded.

Punta Cana has 12 championship golf courses designed by Jack Nicklaus, Nick Faldo, P.B. Dye and Tom Fazio. They are like symphonies set to landscape architecture. They all present a challenging game, yet are a stunning beauty to behold. If Rembrandt were alive today his observation would be, “Wow!”

The local airport for the east coast is the Punta Cana Airport with two runways. The new one, completed in 2011, accommodates planes carrying 500 passengers.

North of Macao, where Hard Rock Hotel and Casino and the Roco Ki golf course are, is more endless beach and the towns of Nisibón and Miches, together with vast tracts of undeveloped land now mostly used for adventure tourism.

In 2002, a law was passed to give financial aid to specific areas experiencing low tourist development but with great potential. These areas offer attractive opportunities for investors interested in tourism developments. Nisibon was one that was specifically mentioned in the law. Though many years have passed since its passage, at the same time development moved up from the south with a steady, unswerving pace. Next stop, Nisibón.

These vast tracts of forest and extensive beaches up through Miches promise to be the ecological tourism development area of the near future.

Miches has two large, what would be called coastal lakes, Laguna Redonda and Laguna del Limon, future tourists will play in fresh water and in salt water. This is made more attractive with the backdrop of Monte Redondo in the background.

Miches overlooks the entrance of the Bay of  Samaná, where 1000s of whales come to birth and breed every February and March. Slightly west of the town is the ecological wonder of the vast, 319 square mile (826 square kilometer) Los Haitises national park with its two Holdridge life zones: humid subtropical forest and very humid subtropical forest, as if humid by itself were not enough.

The east end of the Dominican Republic has been, and will continue to be, a tourism and residential region keeping pace with the life and styles of residents and vacationers—a good place to live, a great place to invest in Punta Cana real estate.