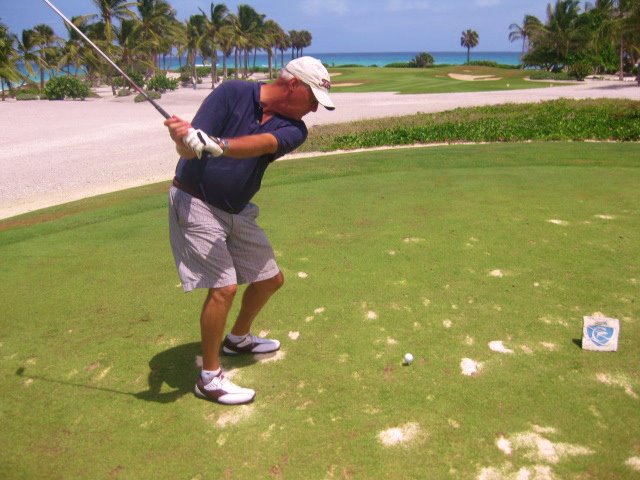 The Dominican Republic is well-known around the world as a top-shelf golf destination.  Visitors come from Europe, North America and Asia to partake of the wide selection of new as well as established world-class championship courses designed by the great architects: Pete Dye, Tom Fazio, Jack Nicklaus, and Robert Trent Jones. Names like Teeth of the Dog, Playa Grande and Punta Espada ring like music in the ears of golfers everywhere. Indeed, the Dominican Republic is a visiting golfer’s paradise.

But imagine the opportunities available to the resident homeowner living amongst this bounty! For four friends from Cabarete, that bounty presented itself recently when they decided to take a long weekend away from the north coast. They played a few of the great courses near La Romana in the south and Punta Cana/Cap Cana in the east.

The four were members of Fedo Golf, the Dominican national golfers association.  Membership is $100 per year and entitles members to many free and discounted rounds at some of the great golf courses of the country. In addition, these friends joined the Teeth of the Dog Association (TOD) for $50 per year. This entitles members to discounted play at the great Casa de Campo courses (Dye Fore, The Links, and Teeth of the Dog). In addition, the TOD sponsors frequent tournaments, and it is one of these tournaments that the four friends, Tom, Dave, Ken, and Eric, decided to enter.

The entry fee of $295 entitled each player to around each at Corrales in Punta Cana, Punta Espada in Cap Cana and Teeth of the Dog in the sprawling south coast resort complex known as Casa de Campo”. The entry fee includes a golf cart. Because the players were TOD members, they were able to play an additional fun rounds at Teeth of the Dog and the famous Dye Fore. They found a charming Italian Inn in La Estancia, 10 km east of La Romana and each took a room, with nice breakfast included, for $50 per night.

The tournament organizers were very nice and accommodating, allowing the four friends to play as a foursome, despite differing handicaps that would in most places cause them to be split apart. The courses were nothing short of sensational with breezy sunshine and nary a drop of rain. Scores were mixed, and in the end, didn’t matter much. The four played poker in the evenings or drove a few km to Bayahibe, a coastal village, to dine on fresh fish and prime Argentine beef. They even found a Canadian bar with a TV tuned to the NHL playoffs.

The four friends drove from the north coast to the south coast in under 5 hours using the rapidly-expanding network of fine toll roads that are quickly linking most major areas of the country to each other with safe, well-maintained highways. Being the off-season, costs everywhere were a fraction of what they would be in North America or Europe. They played 5 rounds of world-class golf, spent 4 nights in a charming Italian hotel/restaurant, ate dinner at a range of wonderful restaurants…and when they got home, they realized they had each spent less than $800!