Spicing it up in the Dominican Republic

Spicing up with Dominican Republic ingredients!

Traveling to a foreign country means that you get to experience unique fare firsthand. Despite the islands of the Caribbean being close in proximity, each one is known for their own culinary offerings, whether it be a meal featuring a meat that foreigners wouldn’t normally dine on or a mix of Dominican Republic ingredients that seem to make every dish pop.

When it comes to food in the Dominican Republic, generations of tradition and creative concepts by young chefs have created a number of dishes and flavors that vacationers may be unfamiliar with. Yet, the biggest concern visitors seem to have is the language barrier, as most menus are printed in Spanish. It is a good idea to become familiar with the names of some of the most popular methods of food preparation and to learn about the Dominican Republic ingredients before you head to the island. This way, when you see it on a restaurant menu, you’ll know exactly what you are ordering.

A la crema is a creamy white Bechamel sauce. Bechamel sauce is actually French in origin, and is considered to be a “mother sauce.” Traditionally, Bechamel is made by creating a roux of equal parts flour and butter, and mixing in white scalded milk, salt, and other spices. It is then used for sauces in pastas such as lasagna. Legend has it that Bechamel was originally prepared and poured over veal, so the fact that you find it served over protein in the Dominican Republic is not unquestionable. A la crema makes for a moist and rich addition to what could otherwise be a very boring meat dish. 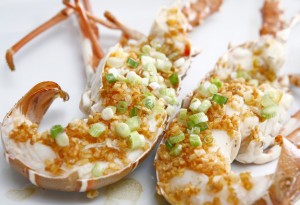 When you see Al Ajillo on the menu, you know that your produce will feature extra garlic. This is typically a safe choice for Americans traveling to the Dominican Republic since garlic is a very commonly used cooking ingredient in the United States.

Simply put, the Spanish to English translation of “con coco” is “with coconut.” However, don’t expect a spry sprinkling of shredded coconut to a dish when you see con coco on the menu. In this case, you will be ordering a seafood dish (often fish or crab) topped with a coconut milk based sauce that features garlic and tomato as main ingredients. 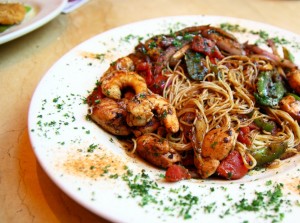 If you prefer that your meals have a little heat to them, ordering a dish that includes salsa criolla will be right up your alley. Salsa Criolla adds spice to both meat and produce, and while every restaurant seems to have their own version of salsa Criolla, most agree that the main ingredients should always be tomatoes, peppers, onions, and salt. The addition of ingredients such as parsley, vinegar, and various oils serve to further enhance the flavors of the base ingredients.